This is for all the Nova Scotians out there! A true East Coast classic, The Nova Scotian Hodge Podge. A dish that is traditionally made in the dead of summer from using up the fresh new vegetables in your garden. New potatoes, carrots, beans, peas are my go too additions to my hodgepodge.

What is a Hodge Podge?

Hodge Podge originally comes from Acadians living in Nova Scotia who would harvest their vegetables at the height of summer from their garden and immediately make them into a soup using butter and cream. Basic, soul warming food, that celebrated fresh produce.

My hodge podge isn’t far off the traditional recipe. I rendered some bacon fat and added more fresh herbs for flavour, but the broth still allows the fresh veggies to shine through.

Each vegetable that I used for this Hodge Podge has a different cooking time. As such I used the blanching method of cooking, which simply means cooking something quickly in boiling water and then dropping it into an ice bath to stop the cooking. This is done to avoid over cooking, and it preserves the bright colours from the fresh veggies.

Prior to boiling anything I suggest prepping all of your veggies. Dice your potatoes, slice your carrots and beans, and shell your peas. I will then bring a pot of salted water to a ripping boil and drop the potatoes in first for 3 minutes. I would then, using a strainer, remove the potatoes from the boiling water and drop them immediately into a bowl that is filled with ice water. This stops the cooking process. I would then move onto the carrots and allow them to cook for 2 minutes, ice bath, and then finish with the beans and allow them to cook for 1 minute. The peas are ok to simply get finished off in the warm cream. More on that next.

Traditionally the vegetables would be cooked in cream and butter. To keep it slightly lighter I used whole milk, a tsp of flour to slightly thicken, and butter. To add more flavour I begin the cooking process by rendering fat from double smoked bacon which offers amazing depth to the broth. I also season with bay leaves, black pepper, salt, and fresh herbs. 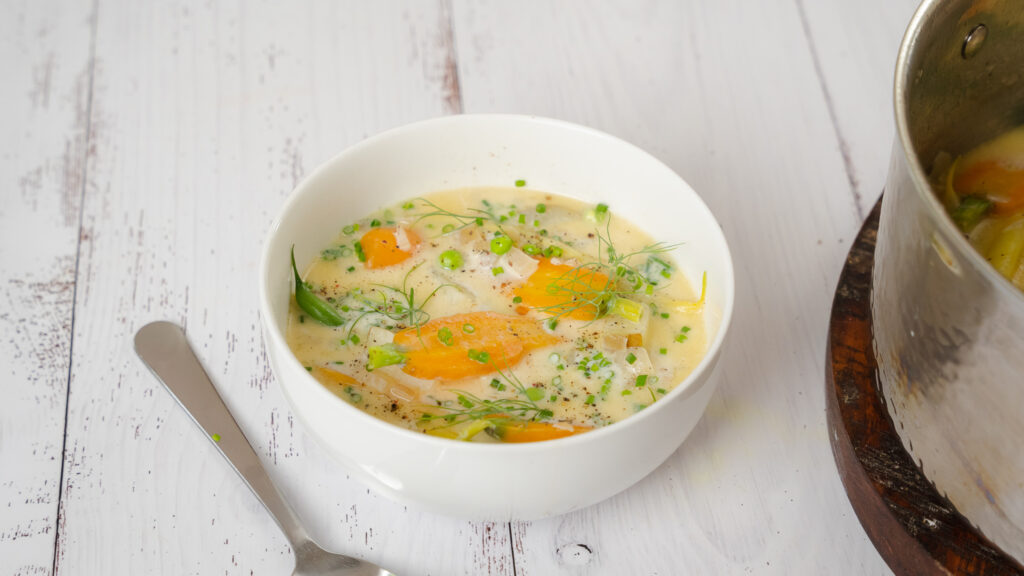