Blueberry grunt is the most iconic East Coast desserts. Homey, approachable, and just feels like a hug for the soul! Perfect dessert to make all year round, but if you can get your hands on fresh Nova Scotian Blueberries in the summer time, this dessert can really sing!

What is a blueberry grunt?

Blueberry grunt is an East Coast dessert that has been around a staple of these parts for a long time. Essentially a grunt is a cobbler using blueberries. A blueberry sauce is made using blueberries, sugar, maple syrup, lemon juice, and water and then a basic dumpling dough is dropped in and steamed in the blue berry sauce. A very comforting, no fuss dessert that is full of nostalgia vibes.

While other cobblers would be made in the oven, blueberry grunts are normally made in a large pot or dutch oven on the stove top. The blueberry sauce in the pot where the blueberries breakdown, release their liquid, and begins to reduce. After about 20 minutes of simmering uncovered, the dumpling dough is scooped into the simmering sauce and the lid is placed on the pot or dutch oven. The steam cooks the dumplings which results in pillow soft, moist dumplings that are perfect!

The dumpling dough is essentially biscuit dough. For those of you who have been following along with The East Coast Kitchen for a while you will know my long standing love affair with team biscuits. (Check out my homemade tea biscuits recipe here). The only difference is instead of baking the tea biscuits in the oven, the cooking happens in the blueberry sauce and the biscuits are steamed. The result is really lovely.

One tip I would suggest for nailing the dumplings is making sure you use cold/frozen butter. I always use a cheese grater to shred my frozen butter as this keep the butter cold and allows the butter to get well distributed throughout the dough.

I suggest using fresh Nova Scotian blueberries if possible. Frozen work great as well. We will also add in granulated sugar & maple syrup for sweetness. I love baking with maple syrup as it adds sweetness and depth to whatever you are baking. I also added in fresh lemon juice which helps provide freshness, but also helps activate the natural pectin that is in the blueberries. This gives the sauce more body when it reduces. Finally, I toss in a bit of melted butter for flavour as well as giving the sauce a bit of roundness.

Ok now the dumplings. For dry ingredients you are doing to need flour, baking powder, baking soda, and salt. From there you add in frozen shredded butter and toss until the butter is coated. Lastly pour in some whole milk and I also tossed in blueberries as well as lemon zest just to make it my own. My the dough together and thats it!

Last step, whip cream. You can use whip cream or vanilla ice-cream depending on your mood! 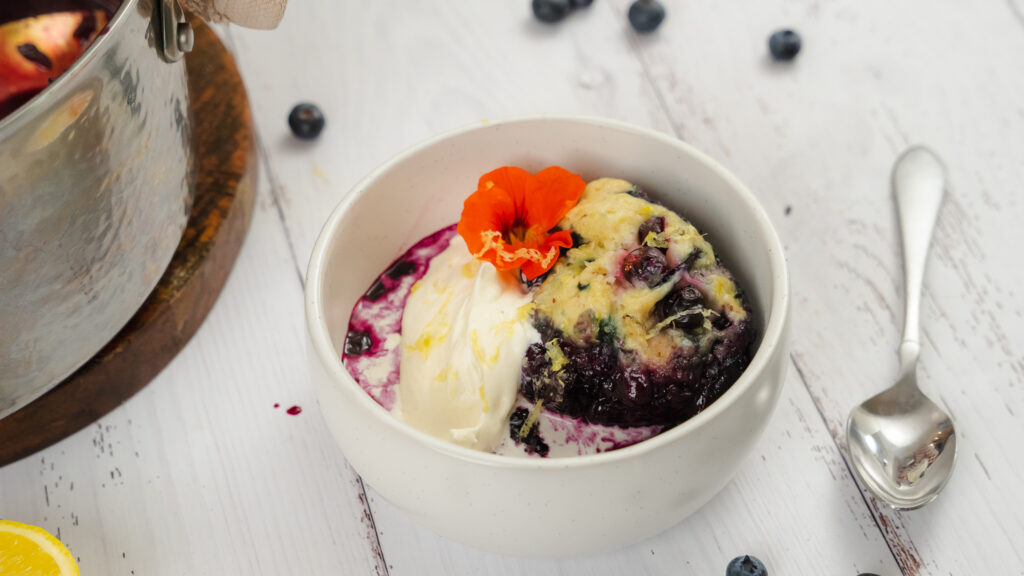