These flakey, easy to make, cinnamon rolls require no yeast or rising. Ready in about 30 minutes, these are the perfect treat to make on a weekend morning or for a special occasion!

In our house, we are enormous cinnamon roll fans. There is no cinnamon roll that we don’t love. It is a treat we always pick up at the farmers market, and it is a baked good I have made with my two daughters for years on special occasions. While I do like every cinnamon roll I have tried, the best ones for me are these biscuit cinnamon rolls. Beyond the flakey, sweet, spiced, taste, they are really easy to make. Some home bakers get very intimidated by baking with yeast, which makes baking these no yeast cinnamon rolls that much more appealing! No yeast, no rising. About 40 minutes from measuring ingredients to eating a fresh cinnamon roll!

Let me be very clear and reassure you that even if you are a novice baker, you can make these! For the dough I simply doubled the ingredient quantity from my famous tea biscuit recipe. This dough is tender, flakey, and absolutely perfect for these Cinnamon rolls. The process of making them is not difficult, but there are a couple key steps you will want to follow.

Rolling your dough into cinnamon rolls.

Once you have your dough folded 3 times you can then roll the dough into a large rectangle. The next step is to brush on some melted butter and then generously sprinkle  brown sugar and cinnamon over the entire rectangle of dough. From here you will roll the long side of the dough over itself creating a log of dough. From here it’s time to cut the dough into individual rolls. The best way to do this is using a piece of string, or dental floss. Slide the string under the log, cross the strings over the top of the log and pull each thread in its opposite direction. This is by far the best way to cut the rolls as it doesn’t squish down on the dough. Place each cinnamon roll onto a parchment lined baking sheet, brush with some milk, and then pop them in the oven!

These cinnamon rolls are our family recipe and we make them every single Christmas eve. This is a special activity that I do with my two little girls that I just love so much. Beyond the amazing quality time spent with them, we are all rewarded with fresh, warm, cinnamon rolls at the end. Nothing better! 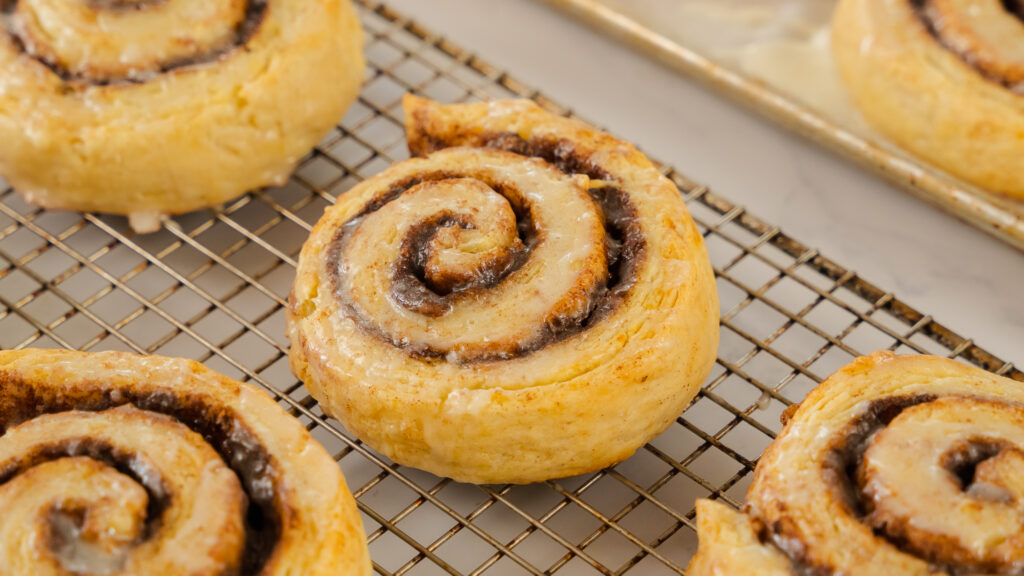