This copy cat Starbucks Spinach and feta wrap is an amazing breakfast meal prep option that is packed with protein, and frankly tastes way better than the original. Soft egg white omelet, cream cheese and sun dried tomatoes spread, sautéed spinach, salty feta, all folded together in a toasted whole wheat tortilla. It’s delicious and a great option to grab on the way out the door!

There are very few healthy drive through options out there, especially for breakfast. As such, Starbucks is one of my go to’s when I need to grab something relatively ok to eat. The decision inevitably comes down between their Sousvide Egg bites (find my viral recipe for DIY Starbucks egg bites here) and their Spinach and Feta wrap. Since I have already done a DIY version of those, it was time to tackle the wrap.. And I have to say, pardon the gloat here, but I nailed it. SO much better than the Starbucks version.

This is a very simple way to make this egg white omelette. Place a non stick pan over medium heat and drop in a tablespoon of butter. Once melted, pour in the egg whites and season with salt. Now just let the heat do the work. I like to take a silicone spatula around the edge of the egg whites and tip the pan to one side to allow the uncooked eggs whites on top to hit the pan. Do this a couple times until the whole omelette is set. Once set, remove from heat and then fold the omelette like a letter going into an envelop. Now you can slice the omelette in half.

Step one: Spread the sun dried tomato cream cheese over the wrap.

Step two: Layer on the sautéed spinach and crumble feta in centre of wrap.

Step three: Lay on half of the full omelette (this recipe makes two wraps) and season with salt and pepper.

Step five: Get an oiled pan nice and hot and gently drop the seam side of the wrap on the heat. Allow to toast golden on both sides.

If you are planning on meal prepping a bunch of these go for it! I would suggest that after you pan sear the tortillas, you allow the wraps to fully cool. Once cooled, wrap in parchment paper and then place into a freeze bag. Freeze for up to 3 months. When heating from frozen, you have two options. Firstly, you can pop it in the microwave for about 2 minutes, or secondly you can remove from freezer the night before and allow it to thaw in the fridge. In the morning you can pop the wrap onto a hot pan and heat it up that way! 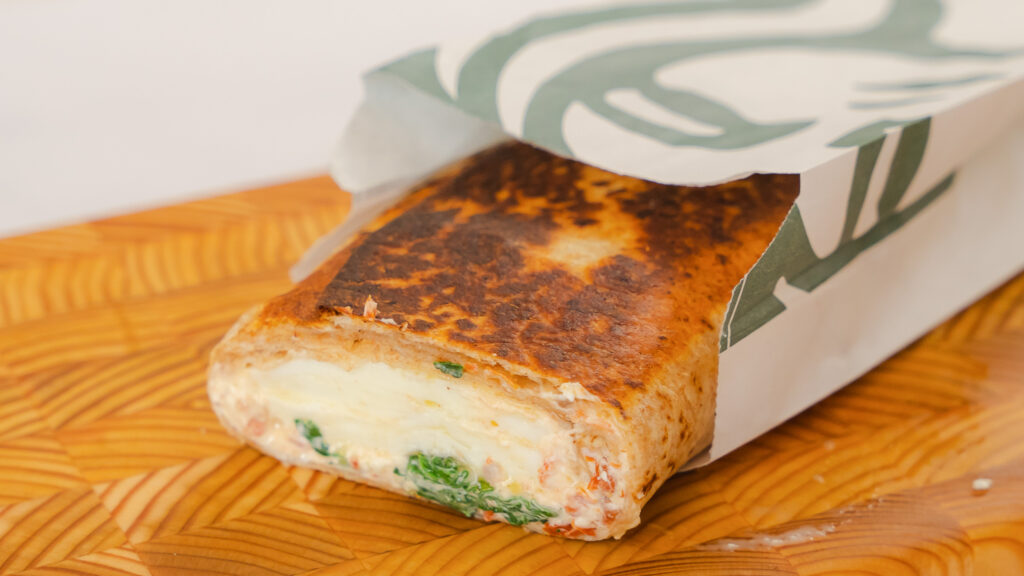